Tan, age 38, Singapore citizen. Graduated with a diploma in business in 2004 from the Productivity Standards Board – Singapore, and a bachelor’s degree in business accounting in 2007 from RMIT University. He gained recognition as a certified public accountant (CPA) of Australia in 2011. He began his career by working in SIGNATURE SPACE Pte.Ltd – Jubilee Industries Holding in January 2014 with his last position as Senior Accountant Executive. In January 2008 working as an Accountant in JIN LI MOULD MANUFACTURING Pte.Ltd – Jubilee Industries Holding. Furthermore, in 2009, working in Tat Hong Holdings Limited as Assistant General Manager. In 2016, working in the Straits Corporation Pte.Ltd – Singapore.

Sutina, age 47. She obtained her bachelor degree in Civil Engineering from Universitas Kristen Indonesia in 1992. Sutina began her career as Assistant for Field Manager and Structure Expert of Tata Mulia Contractor for the period of 1991-1994. She then served as Technical and Field Manager of PT Karya Bayu Abadi for the period of 1994-1995. In 1995, she joined PTIS as Site Manager. Having succeeded in managing site operation she was appointed as project manager that gave her experience in Marine Engineering and Logistics. She was appointed as Director in 2007.

M.Lendi Basarah, age 60, He Obtained his Bachelor’s Degree from Central London College, England in 1981. Continued his studies at Chaminade University Honolulu, Hawaii, The United States, and graduated in 1985. Starting his carrier as a Technical Assistant in  Consulate of the Indonesian Embassy in London in 1981. Previously served at PT Bank Niaga in 1985 – 1995 as  a Treasury & Cash Management, Head of Business Development and Sharia Business Division at PTAJ & DPLK Principal Indonesia in 1995 – 2001 and HR Team Leader at PT Jasa Angkasa Semesta since 2002. He join PTIS in 2011 as Human Resources Director and appointed as Independent Director in 2018. 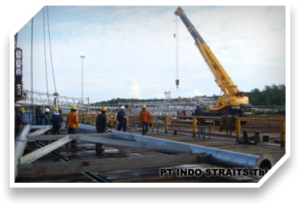